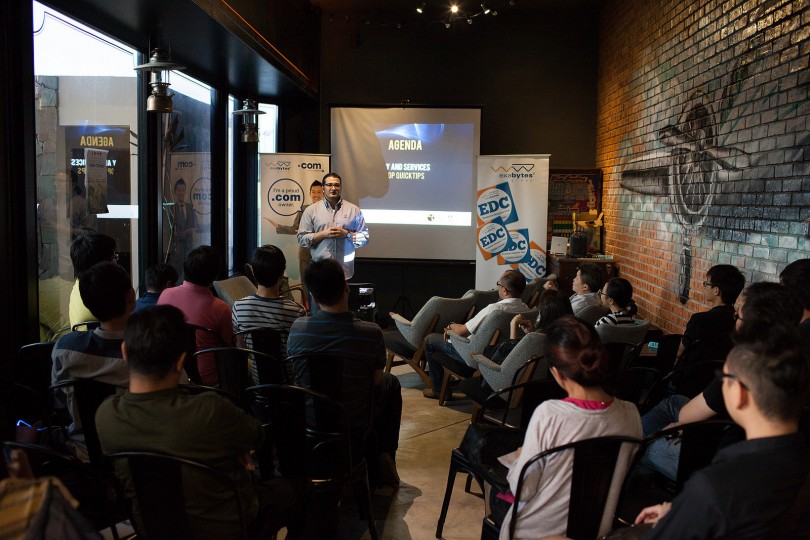 Experienced web designers, freelancers and even students turned up for this special event.

The event started at 6:00pm but a few enthusiastic attendees had arrived earlier to get themselves prepared for this exciting event! The crowd started to size up from 6:00pm onward. After completing their registration, participants were immediately served with delicious dinner prepared by Kaffa Cafe.

The event officially kicked off at 7:00PM with a welcome speech by Vickson Tan, the project leader of Exabytes Designer Club. This was then followed by the presentation of Mr. Hussin Khan.

Mr. Hussin greeted the audience with a self-introduction. He is well known for being an Adobe Certified Instructor and the master trainer in HKVFX – Visual Effects Training, the Certified Nuke Training Centre and Adobe Authorized Training Centre based in Cyberjaya, Malaysia. In a nutshell, a highly skilled and experienced guru in visual effect and Adobe Photoshop.

It was a surprise to a lot of attendees that our speaker had contributed in many Hollywood movies’ visual effect production, including the very famous one that won the Best Visual Effect at Oscar 2013 – Life of Pi.

After the incredible self introduction, he started the ball rolling by telling us the latest Adobe updates and also sharing some amazing benefits of using Adobe Photoshop.

The atmosphere got livelier when Mr. Hussin shared special tricks which were incredibly handy and could make a designer’s life easier. The session became even more engaging as speakers and participants interact with each other during the process.

Soon the Q&A session followed. Next, it’s the much anticipated Lucky Draw!

Congrats to our lucky participant. Mr Tham Weng San who won a unit of power bank sponsored by Exabytes.

Finally, the event came to a perfect close. EDC’s leader Vickson was seen giving a complimentary gift to Mr. Hussin as an appreciation for his kindness in sharing with us his knowledge. Once again, thank you Mr. Hussin! We would like to express our gratitude to Verisign for their support to this event as well.

The first EDC gathering was truly a successful one and we are certainly looking forward to the next gathering which is happening soon!!!!!

If you are a web designer, or simply love design, what are you waiting for? Sign up to become an EDC member now! More rewarding gathering and events are on their way!